We are transportation and mobility experts.

From equipment and supplies to knowledge and progress, our company is evolving with our desire to reach new frontiers.

We are transportation and mobility experts. Railquip works tirelessly to provide efficient machinery and service solutions for the railway industry. We believe in the power of rail to continue to change the future; we connect our customers and nation goals with more reliable, efficient and sustainable equipment solutions.

Making the process of general contractors and customers’ lives easier, at Railquip we aim to be one of the world’s leading producers and providers of all industrial equipment for railway workshops.

Our goal is to provide a superior quality service. By continuing and deliver equipment with European technology and American made craftsmanship, we aspire to be the world’s premier equipment delivery company.

Louie Schroeder is the second generation to run Railquip, following in his father’s footsteps. Since January 2018, Louie is responsible for running all facets of the business. Previously, he served as the Sales Manager at Railquip, handling the major accounts for rerailing systems, battery powered railcar movers, and in-floor lifts. He received his B.B.A. from Valdosta State University in 2014.

Louie has always shown leadership skills and leads with a ‘no-problem’ attitude. His whole life, he watched his father build Railquip through hard work, persistence, dedication, patience, and charm. With a strong commitment to Railquip’s growth, Louie is best known for his intuitive thinking and seeking new opportunities. His vision for Railquip’s future is exceptionally clear.

When he’s not working and following up with customers, Louie can be found hunting or traveling.

Jim came on board in April 2017 and brings over 30+ years of experience to the Railquip team. Beginning in 1986 with railway machine tool parts sales and service, moving up to machine tool sales and installations in the 1990’s, through 2+ decades of selling railway equipment worldwide, Jim brings experience to Railquip for expanding on a global basis the company’s product lines of railcar movers, rerailing equipment, and workshop maintenance products.

Jim has been involved with railway products and equipment from: Ankara to Aleppo; Beijing to Bangkok; Dammam to Delhi; Guadalajara to Guangzhou; Ho Chi Minh City to Hong Kong; Istanbul to Izmir; Jakarta to Johannesburg; Kuala Lumpur to Karachi; Kaohsiung to Kunming; Manila to Moscow; Nouadhibou to Nebo; Riyadh to Rio de Janeiro; Shanghai to Seoul; Sydney to Singapore; Taipei to Tel Aviv – putting this sales and marketing experience to the benefit of Railquip for the ultimate result of meeting customer’s satisfaction and exceeding customer’s expectations worldwide.

His hobbies include backyard BBQ grilling and auto mechanics. Jim’s motto: “Let’s go get that sale – The world is a big place, and growing smaller all the time!

Ron joined the team in January 2019. He graduated from the Milwaukee School of Engineering (MSOE) in 2007 with a Mechanical Engineering degree. He has worked in the industry for over 12 years with 5 years in engineering at Whiting Corporation and 7 years as a product sales manager at Macton Corporation.
Ron’s immediate goals are to help grow our presence on the freight rail side and assist with any transit rail and equipment service needs. On the non-rail side, Ron brings years of experience selling custom turntable applications for loading docks, auto shows, revolving restaurants and more. He created a new relationship between Railquip and the Australian Turntables Company and we are now their American distributor. We are very excited to diversify and introduce these product lines to new customers around the country.
Ron is married with 3 daughters and lives in Greenville, SC. He grew up South of Chicago but has family roots in Wisconsin. That is how he became a huge Green Bay Packers, Milwaukee Bucks and Chicago White Sox fan. His hobbies include volleyball, golf, trying local food and craft beer during his travels, as well as flipping houses.

Stephen coordinates warehouse operations. He prepares and processes a wide variety of shipments. Pulls and packages customers merchandise, coordinates to support both internal and external customers. All while ensuring compliance with environmental health, safety, and corporate regulations.
When Stephen is not working, he enjoys his dog Todd and hunting waterfowl with his big brothers. Stephen’s duck of choice is the North American Shoveler.

I come from a home composed of riggers, millwrights and machinery movers. For which reason I’ve always been familiar with the machinery and mechanical industry at a very young age. Im a Second Generation Rigger and Machinery Mover but I’m a Millwright at heart.

Immediately after graduating high school in the year 2000 I joined the Carpenters Union as a Millwright And before completing my four year program I acquired experience in four Entirely different projects with a couple different organizations.

In these projects I learned machinery moving and rigging before all. Immediately followed by mechanical work on Power generating Turbines.

As a certified welder I Always had plenty of work fabricating and installing conveyors for multiple projects. Finally finding a passion above all for Heavy Industrial Rail Equipment installations and maintenance.

Hector brings a wealth of knowledge to Railquip to better assist our customers with the increasing demand.

Dustin comes to the Railquip team with over 24 years experience in the rail industry. Starting out with his family’s company working weekends at coal mines and maintenance facilities, servicing locomotives. As the years went on Dustin started to lead projects, train teams for repair and installation and managing shop productivity.

Eventually Dustin found himself in a different industry maintaining Automated Detection Equipment ” Bomb detection and Xray equipment for heavy equipment and cargo”, but missed the rail industry. At that time Railquip was able to bring him onboard.

Dustin spends his spare time with his wife and daughter, going on nature walks and spending time at the beach. When not with his family, he enjoys creating and developing test equipment for the rail industry, using 3d printers to make markups of his ideas.

I Graduated as an administrative assistant in 2007 and have fifteen years experience in customer service.
I was introduced to this industry by my husband over eighteen years ago and have officially became involved and active in the field as of 2015.
I enjoy being able to help people and always strive to deliver high quality service to all our customers.
What I love most is being able to spend time with my family, traveling and cooking!

Blake joined the team in March 2022 as a Project Manager and Product Specialist. Before joining Railquip, Blake spent seven years as a Manufacturing and Controls Engineer in the Automotive and Water/Wastewater industries.

His responsibilities include overseeing multiple projects while managing costs and customer satisfaction. He is also focused on growing Railquip’s service product business, focusing on the rerailing equipment and railcar mover product lines.

Blake graduated from the University of Alabama with a Bachelor’s degree in Mechanical Engineering in 2015. His hobbies include weightlifting, reading, cooking, and supporting the Crimson Tide, Atlanta Braves, and Atlanta United.

Graduated with a Bachelor’s degree in Integrative Studies from Kennesaw State University in 2018. Was a member of the Division 1 Baseball Team in each year of attendance. Following graduation, went on to work for 3 years for a general contractor  in the commercial construction management industry. This prior experience has brought project management knowledge of how projects operate from both sides of the industry. Also, it helps bring a great understanding of managing project flow and customer expectations.

The majority of my spare time is spent with my wife, Courtney, working on our small homestead in North Georgia. I also enjoy anything outdoors, including deer hunting, golf, and watching the Braves win the World Series.

Clark Davis came to Railquip in early 2022. He brings over 35 years of management experience. Prior to Railquip, Clark was Executive Director/CFO in professional service firms involved in all aspects of business including financial, technology, marketing, personnel and general administration. He is working to bring   best practices ERP to Railquip.

When he’s not working, he enjoys spending time with his wife traveling, following the markets, and golf.

Doris is proud to be a member of the Railquip family for almost 20 years now. She is responsible for supporting our executives, management and all departments to ensure the smooth functioning of our business. Aside from providing administrative support, she also performs numerous duties, such as keeping track of all Railquip records, ensuring filing systems are maintained and current, and processing of checks for domestic and international payments.

She studied executive secretary and international business at SENA. Her hobbies include reading,dancing, and cooking. 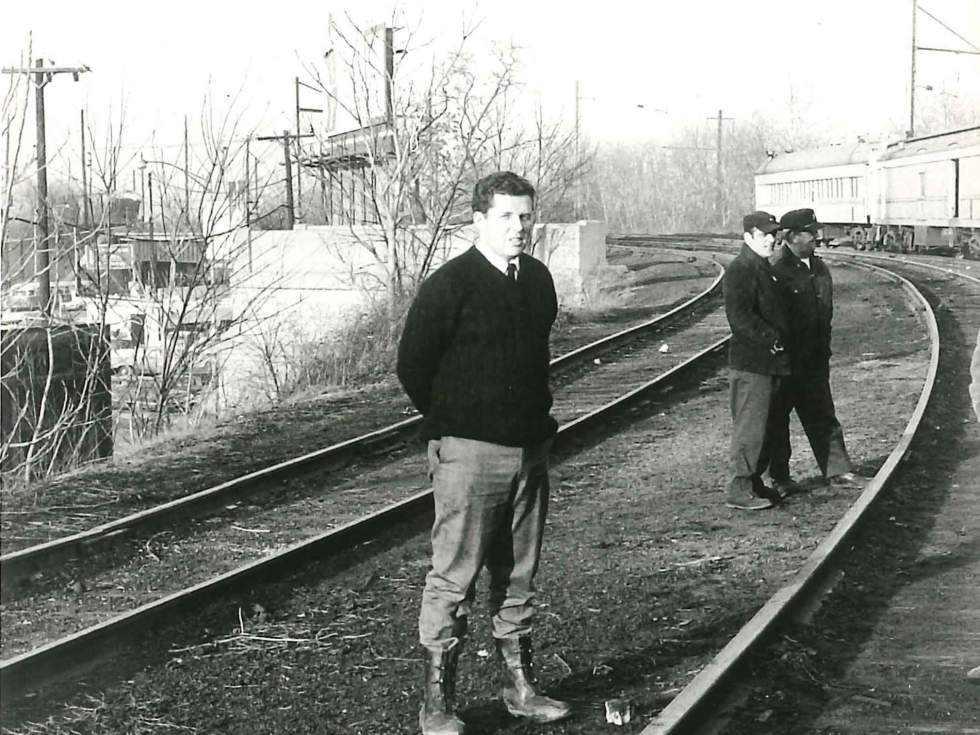 Helmut Schroeder, founder of Railquip, was born in Dortmund, Germany, and came to the United States in 1966 as vice president of sales for Hoesch Manufacturing, where he was in charge of market development in North America.

In 1983, he became the sole distributor in North America of the Hoesch re-railing system and formed his own company, Railquip. Over the next 35 years, Railquip came to represent many manufacturers of rail- and transit-related support equipment, shop equipment and machinery, and maintenance of way equipment. Outside of business, Schroeder was interested in fine arts and dining, and soccer.

Schroeder passed on October 30, 2017 following an illness. His son, Louie Schroeder, has now taken the platform as the President of Railquip, Inc.

Support & advices from our team of experts

Social impact: what makes you move